Fact: If you are reading this right now, which is true, you’re intelligent.

Fact: Intelligence is a combination of knowledge and experience.

Fact:The need for rules is a clear indication we have freewill.

Fact: You are an intelligent spiritual person with freewill.

Those are the facts. We know that Intellect and Will are meant to be together. They are Soul mates. Get it? Soul – mates, as in Soul, Intellect and Will. Never mind. Suffice to say they are designed to complement each other but don’t always agree. Like men and women, they may appear unbalanced but do balance each other. Working together they make a great team for good. When not working as a team – stand by. Intellect and will are engaged in this dynamic, complex interaction.

I imagine the two of them making an appointment to come in to my office. Intellect makes the call. It is always intriguing discovering who makes the call. In this fantasy, Intellect is efficient, functional, organized, practical and rule-based. Will is more whimsical, impractical emotional, and spontaneous. Intellect reviews each option without emotion before making a choice. Will is all about feeling. Intellect follows procedure whereas Will is not known for staying with the plan. Intellect tends to be less passionate. Will on the other hand is victim to passion and tends to put less thought in a situation. In a word, Will is spontaneous. Intellect is at the other in of the fun meter at – purposeful. The two represent the yin yang of male and female energy.

The Intellect is boss to the Will but she has power to influence the Intellect. My wife says, “The husband is the head but the wife is the neck.” They both need the other to survive and know it. It adds a bit of comedy to the love hate relationship.

Note: The aforementioned drama is acting out inside you and me. The struggle appears each time you need something you really don’t want and want something you really don’t need. That feeling is (Will) crying for attention, pointing out how much you want and need a thingamabob. Then that little voice (Intellect) says “No,” you want it but don’t need it. Just as often, it happens in reverse. The Intellect says, “let’s go for a run like we decided” and Will answer, “Oh! You were serious about that?”

This Intellect and Will dance started in the Garden of Eden. The intellect knows what fruit is forbidden and why. It stands guard protecting the rule of obedience. Temptation seduces the Will into a false sense of desire. From this point Intellect and Will dance for control, if doubt is allowed to break in. It weakens Intellects argument, giving Will an opportunity to turn the head in a different direction. This is the essence of the Fall and the theology of sin. 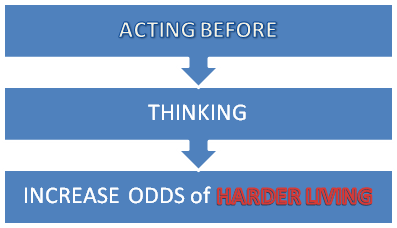 The blueprint for success depends on whose driving. The design hinges on thinking before acting. In other words, Intellect over Will equals success. Sin is most likely to occur when Will overrides Intellect.