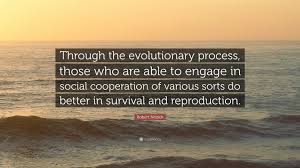 If I say nature and survival, chances are that you will say something like Survival of the Fittest. Who came up with that? What do you think?

Charles Darwin wrote a book in 1859, On the Origin of Species. Six years after Chuck published his book, Herbert wrote a book; Principles of Biology.

Darwin was a Naturalist. He focused on observation and understanding of nature. Measuring and recording his findings he documented his discovery. Spencer was a Sociologist; similar to Darwin, but his focus of study was human behavior.

Darwin embarked on a five-year survey voyage around the world on the HMS Beagle in 1831. Twenty-nine years later he published his studies of specimens around the globe which led him to draw up his theory of evolution and his views on the process of natural selection.

Natural Selection: The process by which forms of life having traits that better enable them to adapt to specific environmental  pressures’s,  predators,  changes in  climate, or competition for food or mates, will tend to survive and reproduce  in greater  numbers than  others  of their kind, thus ensuring the perpetuation of those favorable traits in succeeding generations.

Herbert, the sociologist, after reading Darwin’s ideas thought – Hey, coo this like … you know like … rationalized oppression.  So he wrote a book and extended Darwin’s theory of animals to include human and coined “survival of the fittest.”

A biologist, after years of study, writes a book on the process  nature – Natural Selection. (By the way, natural and artificial selection is part of microevolution and is common ground for both the evolutionist and creationist). Then, six years later, comes the sociologist’s book that extends evolution into society and coined the term “Survival of the fittest” as way to justify mans cruelty.

One of these men detested slavery while the other saw it as the unavoidable evolution of man.

You ask: What does any of this have to do with Survival?

I am a conservative that believes in free education. The reason is in the paragraph above. I DO NOT want to be guilty of preventing others from gaining the traits to better adapt to their environment.  I can also make a strong argument for reverse social security (25-45 rather than 65-85).

We all seek positive emotions like joy, satisfaction, love, and fulfillment, we need it, it makes us stronger ➡  which is survival.

Are you strong enough to be  part of the team?

Our prime purpose in this life

is to help others.

And if you can’t help them,

at least don’t hurt them.

HOMEWORK: Sometime this week pick out a day to observe. Pay attention to your interactions with others. How many are Good, Bad, or neither? Keep a cont of each. Now, the next time you do this, try to make every encounter Good. What did you discover?