The following excerpt is from C.S. Lewis The Screwtape Letters. The senior demon, Screwtape, is trying to help his new tempting nephew, Wormwood, keep the new Christian sliding away from his faith. 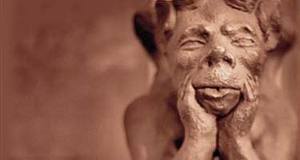 will find that anything or nothing is sufficient to attract his wandering attention. You no longer need a good book, which he really likes, to keep him from his prayers or his work or his sleep; a column of advertisements in yesterday’s paper will do. You can make him waste his time not only in conversation he enjoys with people whom he likes, but in conversations with those he cares nothing about on subjects that bore him. You can make him do nothing at all for long periods. You can keep him up late at night, not roistering, but staring at a dead fire in a cold room. All the healthy and outgoing activities which we want him to avoid can be inhibited and nothing given in return, so that at last he may say, as one of my own patients said on his arrival down here, “I now see that I spent most of my life in doing neither what I ought nor what I liked”. The Christians describe the Enemy as one “without whom Nothing is strong”. And Nothing is very strong: strong enough to steal away a man’s best years not in sweet sins but in a dreary flickering of the mind over it knows not what and knows not why, in the gratification of curiosities so feeble that the man is only half aware of them, in drumming of fingers and kicking of heels, in whistling tunes that he does not like, or in the long, dim labyrinth of reveries that have not even lust or ambition to give them a relish, but which, once chance association has started them, the creature is too weak and fuddled to shake off.

You will say that these are very small sins; and doubtless, like all young tempters, you are anxious to be able to report spectacular wickedness. But do remember, the only thing that matters is the extent to which you separate the man from the Enemy. It does not matter how small the sins are provided that their cumulative effect is to edge the man away from the Light and out into the Nothing. Murder is no better than cards if cards can do the trick. Indeed the safest road to Hell is the gradual one—the gentle slope, soft underfoot, without sudden turnings, without milestones, without signposts,

First: Listen to the Srewtape Letters on audio. It is an incredible story to hear

Second: Talk about what you think

I retired from the Navy in July of 1993. In July of 1995 I started counseling. For almost 23 years I have been helping people with their problems. In those 23 years there is one thing that everyone has in common:  DISTRACTION,  1.) a thing that prevents someone from giving full attention to something else. 2.) extreme agitation of the mind or emotions.