What rrrr You Thinking? 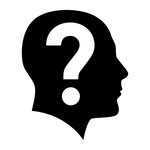 I feel compelled to inform you of the chaos that is my thought process. This comes as an answer to a Reluctant Reader (my wife). Her comment was (in so many words): Your writing is organized chaos that some how manages to end with an eloquent point. In all fairness, she’s lived with me for 25 years and can’t read me without hearing my voice.

The chaos starts with ideas swimming in my head. Something happens to cause one to pop to the surface. When it reveals itself I start throwing things at it to see what sticks. The chaos comes from everything I toss around. This drove my kids crazy when they were younger. My wife and I spent days tossing ideas back and fourth to see what stuck. What drove the kids crazy is that sometimes nothing stuck and the idea was dropped. My oldest complained that we only did a fraction of what we talked about. That’s not a bad thing. The measure is in the action of the things you do.  Too much action without too much thought typically increases pain and that is a bad thing.

When it comes to my posts, an idea pops to the surface as a title. Unfortunate for the title, in the process of seeing what fits, 80% of the time it never makes it to print. Come to think of it 80% of my original ideas morph into new ideas. This is because, as I am throwing things at the original, others come into focus. Maybe I should see a therapist about Attention Deficit Disorder (ADD) 😆

What separates ADD from organized chaos is ACTION.  Check out this post for more about that ➡  https://reluctanttherapist.com/time-for-change/

Alright, sense you bought a ticket to the chaos that is my brain, I will share a secret: This post (originally titled  … With-All-My-Heart) morphed into whatever this post is actually titled. I’ll give you the original idea, just so you don’t feel jipped. A person in my office triggered the idea.

Typically I hear these words in response to any number of direct questions I fire off like:

Do you really want to save your relationship?

Do you really want to be sober?

Do you really want to stop being an

I understand With All My Heart is a literary phrase that expresses sincerity. But what if it was really literal?  What if you really placed your  heart on the line? What would it look like? If you knew that failure to give all of your heart to XYZ would result in you forfeiting your heart (LIFE) would you be motivated to achieve success? That last question was rhetorical.

ALL human behavior comes down to two factors: Pleasure and Pain

Back to the first idea, or was it the second

No matter, as long as we get some good action.

Decision-making is a complex brain process known as thinking. On occasion, people do this before speaking. Thinking is

responsible for choosing an action. Just like talking before thinking, doing something before you think is not good. Wise people think before they act; fools don’t–and even brag about their foolishness. Proverbs 13:16 The benefit of thinking is the the brain remembers. Do enough thinking and soon your brain has a flowchart to follow. This is called learning.

The flowchart is a record of action. Have I done this before? If yes, proceed to step C. If No, proceed to step B. Every choice ends with a decision and that decision controls the action and that action produces an feeling (emotion). That choice is stored in the amygdala region of the brain as an emotion for future use.

There are two amygdalae per person normally, with one amygdala on each side of the brain. They are thought to be a part of the limbic system within the brain, which is responsible for emotions, survival instincts, and memory. The amygdala is a almond sized warehouse of pleasure and pain. The problem is we are emotional

We often react according to what we feel, thanks to the amygdala, and less of what we think. Did you catch that? We are hired wire to react to emotion and less on intellect. I don’t need to point out how much pain this has caused you.

Every action follows thought, whether you’re aware of it or not. If you don’t like the outcome; don’t blame the action, blame the thinking or lack-there- of.

What two things do you think drives human behavior (action)? Think about it for a moment. What controls your actions?

Morality? Ethics? Religion? In my experience, it is pleasure and pain. Pleasure and pain do not require thought, only feeling. Which is what gets us in so much trouble. We all pursue pleasure and avoid pain. I know what you’re thinking. Some things we do (voluntarily) causes pain, except those things are usually in the pursuit of a greater pleasure. Pay attention the next week or so and see what I mean. A lie is for the purpose of increasing pleasure or avoiding pain. For kids and adults it is about getting more of what I want and avoiding punishment.

Morality, ethics, and religion are intellectual exercises meant to strengthen our ability to maintain the will (action). In other words, when you’re caught up in deception or other such behavior, you get a little reminder (warning) from the amgdala, IF you’ve been doing your exercises. If you’re like me, it’s saying hey idiot, you’ve done this before with poor results. That warning is the brain trying to get your attention; trying to get you to stop and think; trying to learn you (that’s Appalachia for teach).

Slow down. Pay attention. Put intellect over emotion. Listen … carefully. Consider the pain of a decision before the pleasure.

“God whispers to us in our pleasures, speaks in our conscience,

but shouts in our pain: it is His megaphone to rouse a deaf world.”