LOVE! Women search for it and men fall into it. In 1967 John Lennon told us, “All you need is love.” If there was a decade that needed love, it was the Sixties. The 1960s were a time of change. The civil rights movement, the anti-war movement, women’s liberation and the new environmental movement all took to the streets. Another remarkable thing happen during that decade; me.

Fifteen years later brings us to the 80’s. Something happen because in 1983 Pat Benatar warned, “Love is a battlefield.” I don’t think Pat was referring to the Regan Era and the rise of the New Right. For many people, the symbol of the decade was the “yuppie”: a baby boomer with a college education, a well-paying job and expensive taste. The yuppie was self-centered and materialistic, and elitist. They were more concerned with making money and buying consumer goods than their parents and grandparents had been.

The 60’s was about Justice and the 80’s was about me. No, not me me but the proverbial me. The self-center, egotistical, instant gratification ME. So it only makes sense that the Addicts would settle it in 1992 with their song, Love Sucks.

“Love is a force more formidable than any other. It is invisible – it cannot be seen or measured, yet it is powerful enough to transform you in a moment, and offer you more joy than any material possessions could”

There are several things I know. 1) We seek pleasure over pain. 2) We have a brain, the more its used – the smarter we are. 3) We are more than biology. If course you can disagree, that’s what the brains for. 4) There is a spirit that connects us. 5) We are stronger united, despite our effort to separate ourselves. 6) We have the capacity to limit pain, but often increase it.

Love starts with what you know.

What do you know? The chief reason to know what you believe and believe what you know, is because it’s vital to who you are. Discarding a belief is easy if you Don’t know it. There is more strength in defending faith (action) then discounting it (apathy). I have more respect for a person who stands by faith rather than attacks it.

One in three people in this world simply don’t know what to believe. I am a Christian therapist, my belief is clear. My actions followed my belief, not always on a straight path, but I do have a compass. That path is made clear because of my faith in the wisdom of the Bible and two simple commandments.

“Love the Lord your God with all your heart and with all your soul and with your entire mind. This is the first and greatest commandment.  And the second is like it: ‘Love your neighbor as yourself. All the Law and the Prophets hang on these two commandments.”

Every once in awhile a word comes along that refuses to be a word alone. Love is one of those words; it is confusing and always abused. It is a variety of different feelings, states, and attitudes. It ranges from interpersonal affection “I love my mother,” to pleasure, “I loved that meal.” It refers to a strong emotion of attraction and attachment. Depending on the situation, it is a virtue representing human kindness, compassion, and affection—the unselfish loyal and benevolent concern for the good of another.

Ancient Greeks identified four forms of love. Kinship or familiarity is storge, friendship is phillia, sexual and/or romantic desire is eros, and divine love agape. Love in its various forms acts as a major facilitator of interpersonal relationships. Love is psychological super glue for connecting one another. The tool unites human beings against menace to insure herd survival. There will always be some that Do, others that Don’t and  others who can’t or won’t choose. 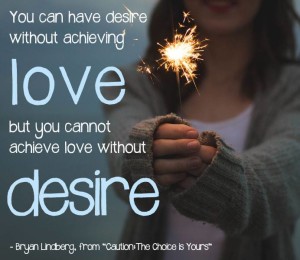 The words, I love you but I’m not in love baffles me. Obviously someone is saying at one time “I loving you, but now I not loving you.” Love – ing the verb, to Love the noun is the point. Unfortunately, the obsession with loving means a focus on being something instead of doing something. The difference; one is me and the other is you focused. It’s not supposed to only be, “What a feeling being in love,” the goal is, “What a feeling doing love.” The entire purpose of love is connection to one another. It transforms a casual association into a desire for something greater. The relationship is the product (noun) loving is the verb that created it.

Twenty-two years ago, I married. At that time, I had a desire that I thought was love. Today, love is the only word able to describe my feeling of connection.

Unfortunately loving sometimes does not equal love. People have many reasons for loving, and many of them are selfish – the one thing Love is not. The lack of knowledge is the culprit. Love is worthy of your attention, your knowledge. What do you believe of love and why? Do or Don’t you practice your belief? No one pays attention when they have it, but interestingly, everyone recognizes when it is gone. You don’t know what you got till it’s gone.

True marriage, whether to a companion or a conviction, is a relationship all grown up. It needs  PP (perseverance and persistence) to grow [CLICK ON LINK] . Love is no longer about you or me, it is about them. Change is essential to move from the garden were the seed began to something greater, it all hangs on a choice.

Caution: The Choice Is Yours. (Shameless plug of my book 😳 )

Join the newsletter below to get each post delivered to your inbox.